Today was supposed to be an easy 38km ride to a white sand beach. Well it didn’t go to plan. Firstly, Allister was stuck on the phone with the Samsung repair people. He then needed us to backtrack to a bank to deposit money into the Samsung repair account.  We cycled back and predictably, the bank didn’t exist. We could only find an ATM with no deposit facilities.

We decided to push on in the hope of finding a bank along the way. No luck so far.

There were two options for cycle routes today. Coastal and highway or inland. We chose inland because Allister felt it would be nicer than the highway. We all agreed and headed off. This was our first hurdle. After crossing this creek and cleaning the grit out of our shoes, we were just about to head off and a motorbike arrived in front of us. The driver of the motorbike was a police officer and he told us we were not allowed to proceed. Understandably we quickly backtracked across the creek again.

In the end we had to zigzag our way south.  After a while we stopped at a 7-Eleven for a cold drink. There was another cyclist there having a drink. He was on a road bike.  He was Anglo looking and after being in Pattaya, I assumed he was Russian.  We all sat down outside to have our drinks and Allister started chatting to him. To our surprise he had an Irish accent. The first thing he said to us was that he was surprised we were not German because he assumed we were German because they are the crazy ones who do cycle tours with their kids. We all had a laugh.

He asked us where we were headed.  He explained that the route we had chosen was not great and he volunteered to lead us. We agreed.  He cycled with us for about 25km. 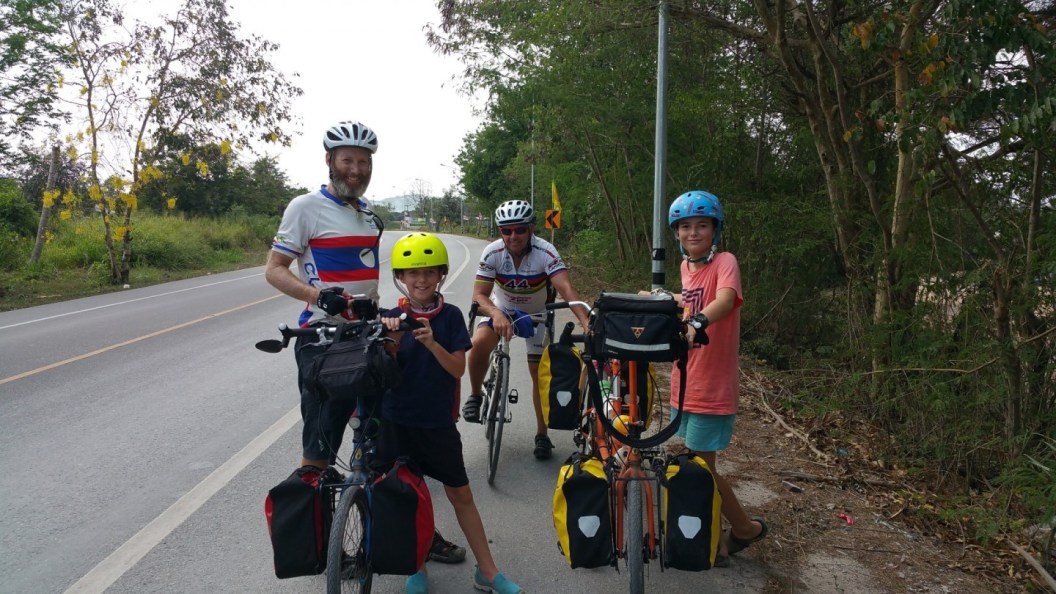 2 thoughts on “Another one of those days. ”