Only a short cycle today, to the next town. We were suppose to be following the river in the rift valley but this section of the valley has a cliff adjacent to the river. This gave us only two options. Walk the bikes along the river bed or cycle up to the top of the cliff. None of us liked the idea of walking the river bed as the river stones were huge, so up the cliff it was.

Half way up we came across a section of road that has started to fall down the cliff. Taiwan is on a fault line and earthquakes are common. Robert liked the idea of waiting for it to fall into the river below but we had to keep on going.

We also had a laugh at the sign in the next photo. We imagined the Australian translation to the chinese symbols is “bloody steep mate”.

We arrived at LuYe township and decided to stay at a bed and breakfast recommended to me by a Taiwanese guy on facebook. The BandB is on a bicarbonate hot spring. Just fantastic. We had a dip when we arrived and then jump back in after dinner. Floating on my back in the hot water watching the clouds flow past the moon was so relaxing. I wish we had hot springs in back home.

Tomorrow we’re going rock climbing and absailing in a cave. It is going to be awesome. It might even be funner than the waterfalls we’ve been to.

Where we’re staying tonight is a nice place. With lots of Bungalows. It even has a natural pool.

We have decided to stay in Trat one more day. Because there is a markets. that is on only once a year.

It Will be fun to enjoy all of the food and goods, That we can buy.

We went to an Awesome theme park called escape.It was very fun. There was Ziplines and high ropes courses. I went in a hoolahooping comp and I got a coconut for winning. 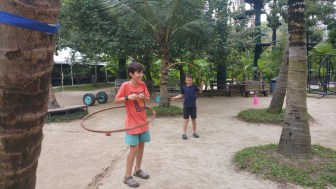 I don’t know how we did it but we did.

It all started this morning from Simpang. We left after an interrupted nights sleep. Two men were sitting in the reception area having a loud conversation.  Our room was just down the hall and their voices echoed down to our room. At 3am I lost my cool and yelled at them. I had to yell at them 4 times and go out into the corridor and stare at them before they stopped talking. The most annoying part was that the two men talking were the hotel night staff.

We hit the road and had a good ride to the next town of Selama. When we arrived we realised that it was not really a town, more like a collection of building with the highlight being a 7/11. We found a Chinese restaurant were the waitress spoke pretty good English.  We had a nice lunch of mee ayam sup and orange juice ice.

At lunch we checked out the hotel situation on Google.  The hotel situation was not good. We started looking further afield for a place to stay the night. We talked it out with the boys and it was decided that we would venture on to the next town of Kulim, 30km away. We broke the cycle up into 10km chunks and at around the 19km mark it started raining.  It was lovely and cool.  None of us cared that we were getting covered in mud and grit. There was one beautiful hill that we had to cycle up along the way.  It was so steep and remote, the jungle was beautiful and there was a clean babbling brook flowing along the road side. 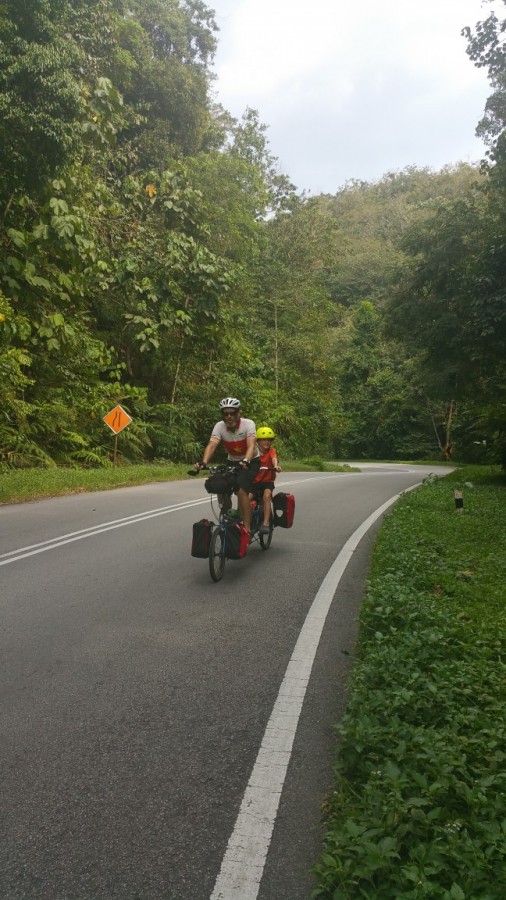 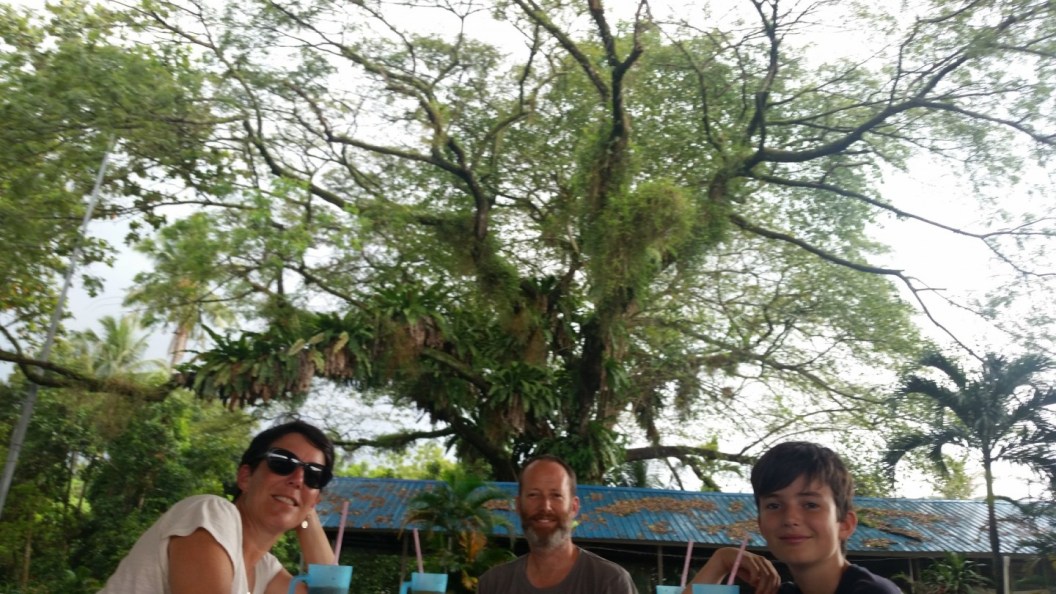 This morning we woke to a storm. Thunder, lightning and torrential rain. It started around 3am with a hugh clap of thunder. The alarm went off at 6am but we stayed in bed until 7am, waiting for the rain to decrease.  When we go on the road it was lovely and cool. Probably the coolest we have felt in three weeks.

During the first hours of cycling every morning, the boys have got into a routine of looking out for a roadside Roti restaurant. Without fail we have discover one every morning for the past few days. Roti for breakfast is our favorite.  The one that we discovered this morning was amazing.  Huge selection of food and the roti was the best so far. 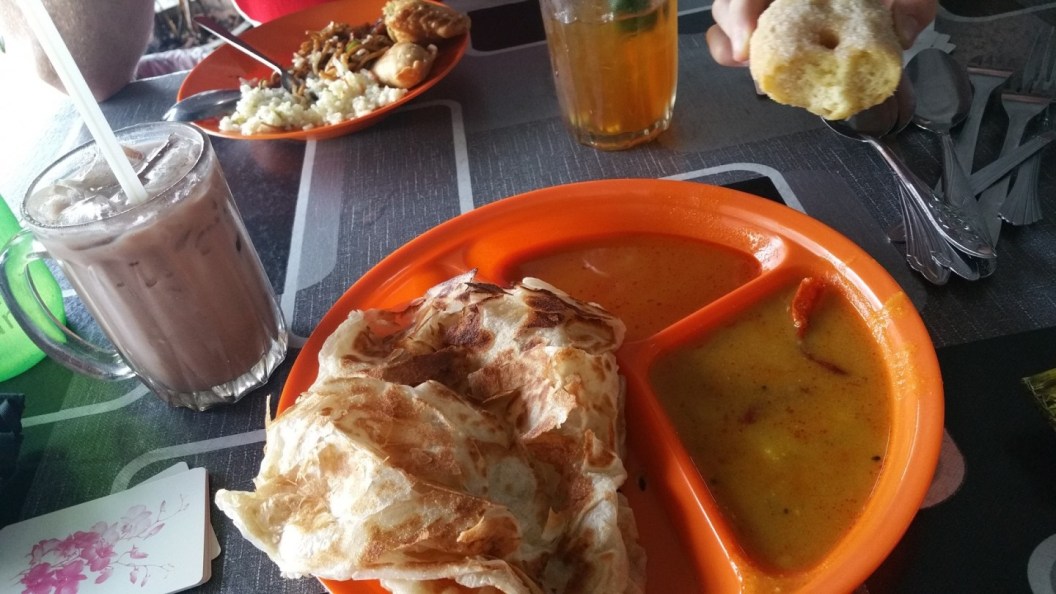 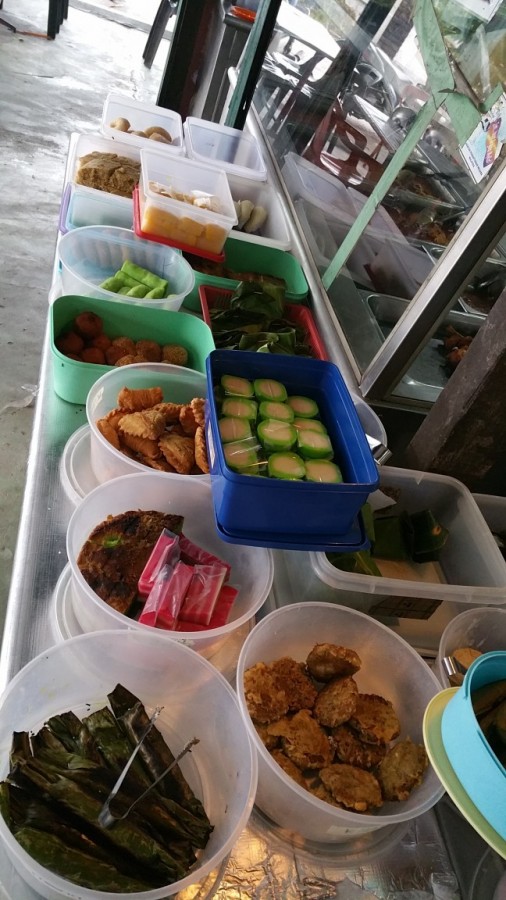 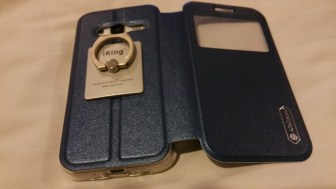 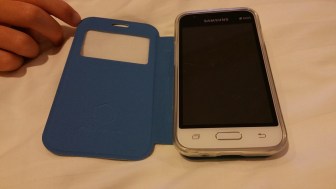 I spent all of my savings to buy a Phone and it is a Samsung Mini Prime. I got it so that I could post on my own phone and not have to use mum’s.