So good to be back on the bikes. Even better when cycling in perfect weather, with a tail wind and most of the time on dedicated cycle paths. Cycling from Taipei to Bali was cycling nirvana.

It was so picturesque I couldn’t stop taking pictures. Normally that would make Paddy chuck a paddy(he hates to stop and doesn’t like being photographed), but he and Robert were in BeyBlade heaven because we rode past a shop that specialises in them, so both of them were in a great mood.

It was a slow and late start today, but we weren’t stressed because the maximum temperature is mid twenties rather than mid thirties, so we can ride in the middle of the day. By the time we were leaving Taipei after getting everything ready and necessary purchases (BeyBlades, orange juice and blankets) made it was midday. We came across a robotic orange juice vending machine for a cup of fresh juice for under $2.

Leaving Taipei via a dedicated bike/motorcycle lane to cross the river.

We had never heard of Bali, Taiwan, but it had a holiday feel and busy boardwalk markets at the mouth of the river.

Sunset at  Zhuwei Fishing Port. We set up our tent in the structure just behind Patrick’s head for our first night of camping on the tour. 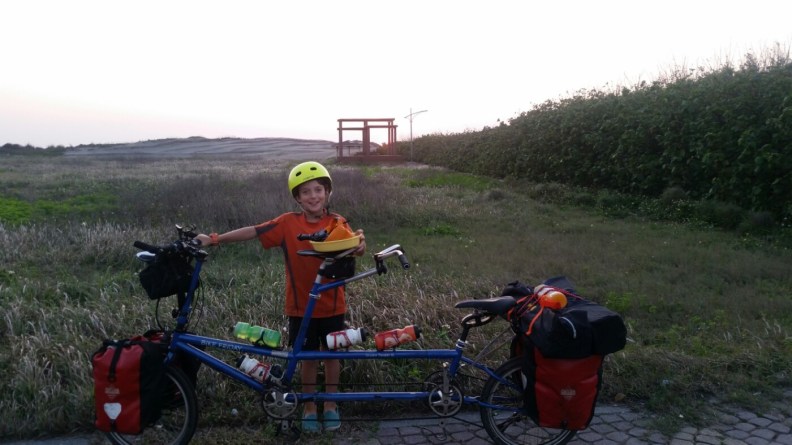