Big day in so many ways today. Earliest start so far, at 6:30am, to beat the sea breeze. You can see the sunrise over the Ban Krut temple in the background below. 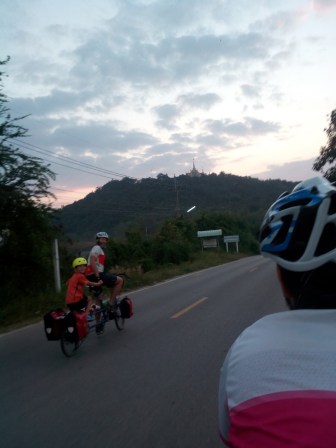 I used MapsMe for the first time to help with the trip planning because it was indicating that we could stay close to the coast and avoid riding on a major highway. Below is the first interesting track it took us on through a coconut plantation.

The amazing thing was that each time MapsMe took us down a dodgy path we had an interesting meeting with other people. The first was after the coconut plantation where it joined up with a normal road, we came across a couple of cyclists – Paul and John. After chatting for a minute, I realised I already knew Paul via WarmShowers and his amazing reputation. Paul is probably the best known person in Thailand for hosting and helping people on cycle tours. In Penang when staying at another WarmShowers, Matteo(another cyclist guest) said he had been in contact with Paul and Paul had given him map bookmarks and routes of Thailand, so he forwarded them to us because we were heading to Thailand. We have been using Paul’s map info ever since, so it is great to say thanks in person and put a face to a name.

The trail though the Hatwanakorn Nation Park was pretty rough and Paul said he had done it before so we thought we would give it a go to avoid riding on a major highway. The first obstacle was a large muddy puddle crossing the track. Patrick and I managed to cross it without getting our feet wet, but the water went up to our hubs, so Julie decided best get Robert to push their bike through it.

The track got us half way through the national park, so after crossing the main tourist road we continued down the track. However, this side was not as well maintained and the track slowly got more and more overgrown until we needed a machete to keep going. I decided to scout out the path and found out why it was so overgrown. The bridge across the river had been washed away, so the track was no longer being maintained. Just after turning the bikes around another pair of cyclists appear asking if they can get though. They were also using MapsMe. After our meeting, we cycled with Klaas Jan and Franciose to lunch and learnt all about their travels. They started in Iceland July last year and plan on cycling until September this year – pretty much cycling around the world.

The final MapsMe adventure also involved another washed out bridge and a chance meeting with a German couple, Hillo and Eric, we meet in Ban Krut yesterday. For more details on that adventure see Robert’s, Patrick’s and Julie’s posts.

On top of all of that we still road over 70kms and had a headwind since 8:30am. You could say we really have our cycling legs now and could give my sister Helen(cycling legend) a run for her money.
Check out my ride on Strava: https://www.strava.com/activities/868176439/