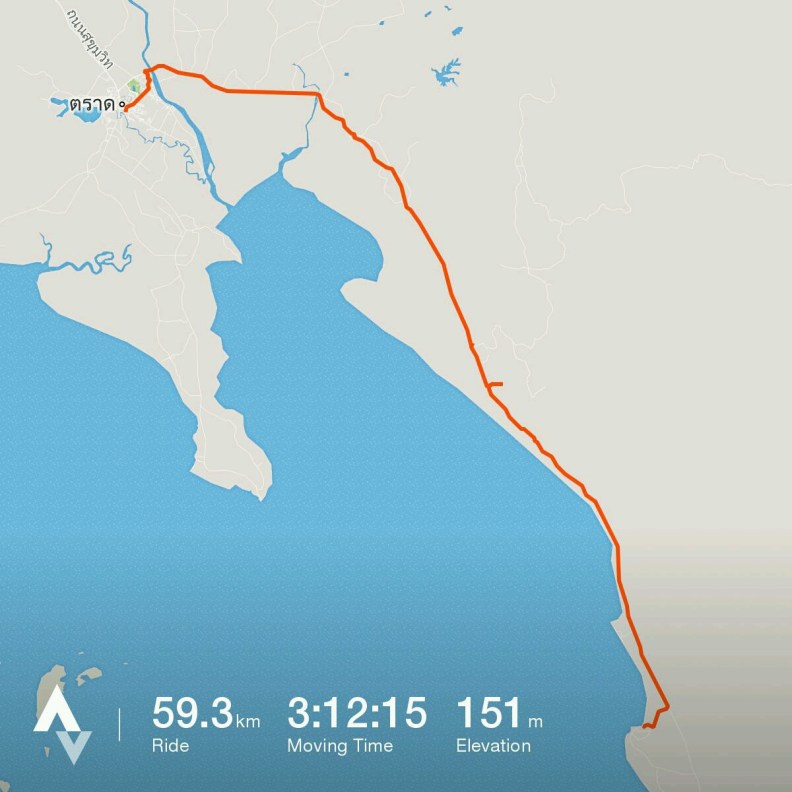 So good to be back on the bikes. Not to say we didn’t have three great rest days exploring Koh Chang and Trat, but there is something about riding into the unknown. We always seem to have more adventures on the bikes and there is nothing like the endorphins of five hours of exercise.

There is really only one main road that runs from Trat to Cambodia because the Thailand is so thin in the south east. We were able to take a couple of side rides, but we spent most of the day on Highway 3. Normally that wouldn’t be much fun, but the traffic was light and because it is the only road we came across other touring cyclists. The first couple were from from Germany and gave us great tips and advice about Cambodia.

We also came across a great local Saturday market where we stopped for lunch.

Less than 5kms after lunch Julie spotted another waterfall that was less than 1km from the highway that looked like it had a large swimming area. It is a great way to cool off in the middle of the day, so we decided to check it out. Little did we know how much fun we were about to have.

When we arrived the car park was completely deserted and there was an empty building with a run down water feature. This didn’t put us off because we could hear water flowing. We walked upstream a few hundred metres and came across a fast flowing four metre waterfall that flowed into a large pool with rope swings.

It didn’t take long for the boys to start swinging and I got in to make sure there was nothing under the water that could do damage. The boys had heaps of fun and Paddy got lots of courage and jumped in as well.

A lone Dutchman cycling from Cambodia’s border to Trat.

Just after 50kms of cycling we noticed a little resort on Google Maps right on the coast. After some discussion we thought we would check it out. When we arrived at the location there was only a car park and a few houses. Luckily the locals said to go down a narrow laneway and we popped out into the location below.

Mairood is a fishing village that runs down both sides of the river. With a few more pointers on where to find the resort, we came across an oasis like garden of Eden. When we inquired about the cost I thought it would be outside our budget, but lucky for us they have budget rooms. The boys were so excited about seeing the swimming pool and there is a white sand beach with crystal clear water at the end of the fishing village, so we have decided to have a rest day after only one day of cycling.