Last night, while camping in Shueipingwun Park in the city of Tainan, we were visited by the local homeless drunk prowler.  It was 1.15am and we were all sound asleep.  I was woken by some noises coming from our bikes. I lay there for a little while trying to work out if it was dogs or something else.  Then someone started walking very closely around the tent making noise.

At this point I got up and went out, very closely followed by Allister.  We discovered an overweight, drunk man, who smelt of alcohol and urine.  I asked him what he wanted. He didn’t answer.  Allister asked him if it was OK to camp here. He said something in Chinese, then wandered off a little way. It was at this point that he started verbalizing loudly. Of course we couldn’t understand what he was saying but it was not directed at us. He seemed to be talking to the tree that he had clothes hung in.

We stood outside the tent for about 20 minutes waiting and watching him. He wandered around for a while then eventually got on a squeaky bike and rode off to the other side of the park.

I think in his drunk state he was probably confused about finding a tent on his patch. He didn’t act threatening at all. If we could have understood him we might have had a better idea, but maybe not.

Anyway, it was at this point that we realize that there was another tent pitched behind a tree near us. We went back to bed with a sense of excitement at meeting another city camper in the morning.

We were woken at 5am by a Tai Chi group next to our tent. That’s what you get when you camp in a city park. 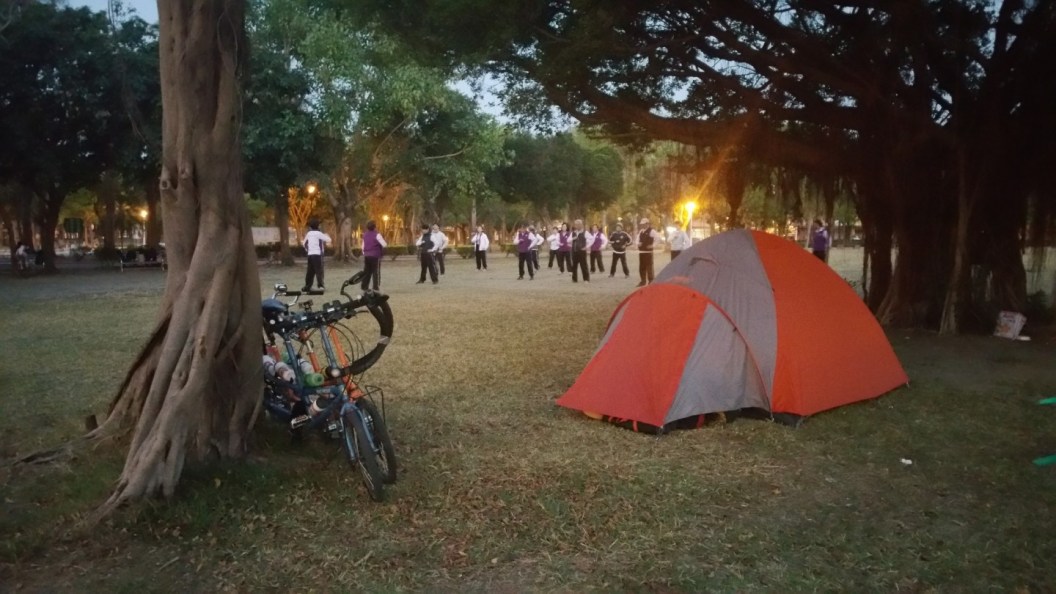 By the time we had pack up, had breakfast and brushed our teeth, sadly the other camper was still not up. We never got to meet them but the boys did get to brush their teeth on a seesaw. 3 thoughts on “The night prowler ”